Skip to content Skip to navigation
See our Campus Ready site for most up to date information about the fall semester.Campus ReadyCOVID Help
Health Sciences Research Institute
A Comprehensive Approach to Research and Innovation
Saturday 23 January 2021 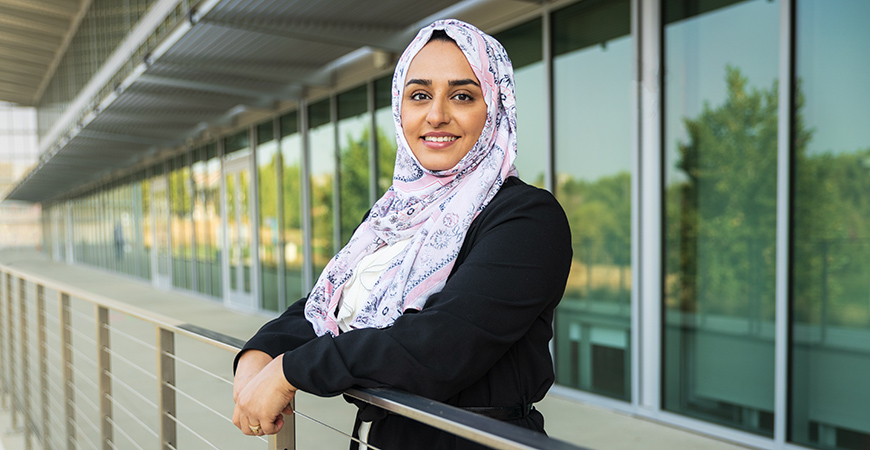 The scarcity of research on smoking rates among Arab Americans led Alnahari to broaden her focus from minority and immigrant health in general to the social, historical and political contexts pertaining to tobacco control.

The TRDRP is an initiative created through tobacco taxes and administered by the Research Grants Program Office at the UC Office of the President.

Her research with Professor Mariaelena Gonzalez is focused in Fresno and Stanislaus counties where smoking rates in general are higher compared to other parts of California, and there are large populations of Arab Americans.

Because she can’t be in the field physically collecting surveys due to COVID restrictions, she’s contacting Middle Eastern grocers and places where Arab Americans congregate, such as mosques and churches, to find participants.

“In the Middle East, smoking is very prevalent; it’s a culturally engrained habit within the society. When I came to the U.S., I found it’s a completely different environment,” Alnahari said. “We have anti-tobacco messaging and you don’t see as many smokers here in California, but I still noticed the same smoking habits with the Middle Eastern population here as I did back home.”

“What the regional studies are telling us is that Arab Americans have very high smoking rates — between 50-60 percent — compared to the national rate of 14 percent,” Alnahari said. “I want to see if integration and discrimination have any impact on the way they perceive tobacco control messaging, the way they interact with people around them and how that impacts their behaviors.”

What about health and death rates?

“It’s also a grim picture for them compared to other populations,” Alnahari said. “Arab American men and women have a life expectancy of one to two years shorter than non-Hispanic whites.”

I want to see if integration and discrimination have any impact on the way they perceive tobacco control messaging, the way they interact with people around them and how that impacts their behaviors.

The three-year fellowship, awarded July 1, covers her tuition and salary, so she doesn’t have to work as a teaching assistant and can spend more time on her research.

Apart from few different culturally-specific questions, Alnahari’s research instrument is the same as the UC Merced’s Nicotine and Cannabis Policy Center (NCPC), so comparisons can be made between populations living in the San Joaquin Valley. NCPC researchers study public health and policy matters related to tobacco and marijuana.

Alnahari said that while California has one of strongest tobacco-control programs, most materials aren’t available in Arabic or they are poorly translated. Her research will be published in English and Arabic, and she is looking for undergraduate research assistants who speak Arabic and want to be involved.

“I love working with students and mentoring the next generation. As a minority myself, I think that it’s important. Once you see someone who looks like you and comes from the same background, it makes it easier to see yourself doing it,” she said.