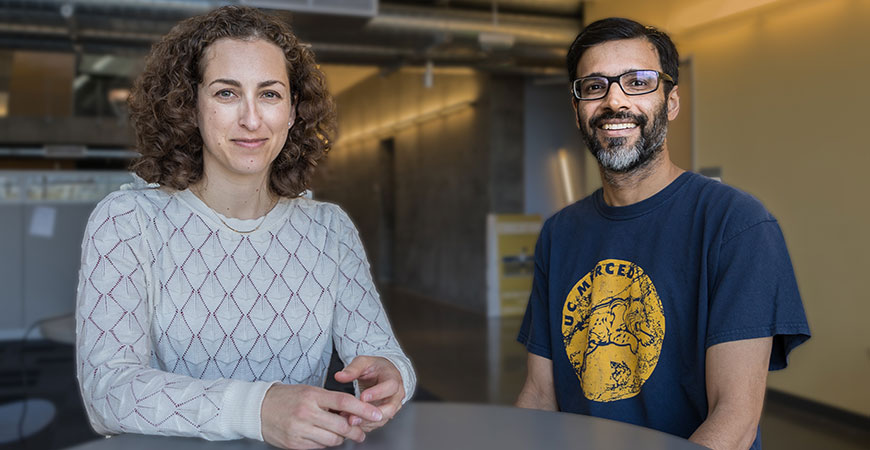 The majority of people who die by suicide do so with firearms, and there were more firearm suicides in America in 2017 than there were homicides committed by any method. Combined.

Those shocking numbers from the FBI and American Foundation for Suicide Prevention are the impetus for two UC Merced professors from very different disciplines to join forces to try and predict who is most likely to commit suicide using a gun.

Professor Sidra Goldman-Mellor, a public health researcher with the School of Social Sciences, Humanities and Arts and the Health Sciences Research Institute, has teamed up with applied math Professor Harish Bhat with the School of Natural Sciences to sift through more than 44 million California hospital records, looking at patients’ basic demographics, visits, admissions and emergency-room visits and outcomes.

Funded by a $10,000, one-year grant from the UC Firearm Violence Prevention Research Center at UC Davis, the researchers aim to design an algorithm that can tell clinicians what to look for among potential at-risk patients and who to target for interventions.

The Centers for Disease Control found that national suicide rates have increased by 25 percent over the past 20 years, and 54 percent of all suicides are among people who had no known mental health condition. Often, those people were never diagnosed with such conditions, so they were never treated for them.

“We feel sure there is a small but very important signal in all this data."

Bhat said he had been looking for a project that involved human health but hadn’t found a “mathematically attractive” question until Goldman-Mellor approached him for this study.

“This project lets me try to help figure out a public health problem without having to know deep details about human biology — there’s a pile of data and it needs to be analyzed,” he said.

They will look at the hospital records for such information as behavioral patterns over time and repeat visits to emergency rooms and link them to state death records to find out who is dying and from what causes.

Bhat will apply artificial intelligence and machine-learning principals to the problem.

“There are basic calculations, such as whether people who die by firearm suicide are more likely to be male or female, or have a history of chronic pain or traumatic brain injuries, but there are no prospective studies that follow people over time and put it all together,” said Goldman-Mellor, an affiliate of the Health Sciences Research Institute. “And we don’t know how the different risk factors can combine and affect patients. No one has used this kind of data in this way before.”

Part of the reason for that could be because this kind of research takes a lot of legwork.

He’ll write new computer code to detect patterns and complex relationships among variables that help predict firearm suicides. In California, the number of gun suicides is lower than the national average and is only a small percentage of all deaths — California’s suicide rate in 2016 was 12.1 per 100,000, according to a news article in the Sacramento Bee. Bhat will explore new methods to amplify the presence of firearm suicides in the data set, a necessary step for machine learning.

“We feel sure there is a small but very important signal in all this data,” Goldman-Mellor said.

The answer will likely be a combination of risk factors, including previous suicide attempts. But even though most people who commit suicide have no history of mental health problems, the data might show increased hospital and ER visits along with primary or secondary diagnoses that indicate mental health issues.

Both researchers said they appreciate the UC Firearm Violence Prevention Research Center’s support. Federal funding for the topic is unlikely because guns are such a political issue.

The researchers agreed that their ultimate goal will be prevention, but that will take a clinical partner. They will also have to show the context of the artificial intelligence’s choices in interpretable visuals, such as a decision tree.

“Clinicians and healthcare systems have invested a lot in electronic health records and they want them to be used,“ Goldman-Mellor said, “but they also need to understand why the models will single out the groups of people they do. We’re very grateful for the Center’s investment in getting this work off the ground.”