Skip to content Skip to navigation
See our Campus Ready site for the most up to date information about instruction.Campus ReadyCOVID Help
Health Sciences Research Institute
A Comprehensive Approach to Research and Innovation
Monday 24 January 2022

Get Up and Move: HSRI Maps Routes for Walking Meetings 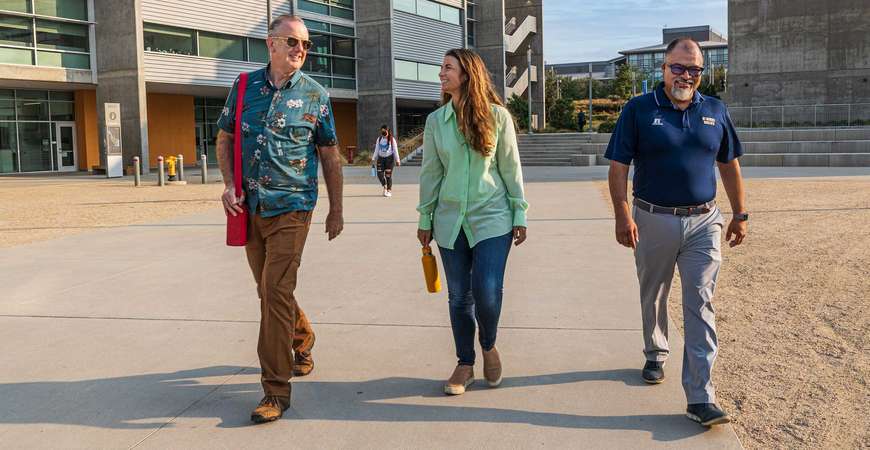 As the daytime temperatures cool and the pandemic persists, colleagues at UC Merced’s Health Sciences Research Institute offer a suggestion: Why not take your meetings for a stroll?

The benefits of walking meetings are well-documented , but with the university ramping up in-person activities in fall semester and the main campus fully configured in its post-Merced 2020 Project form , conditions are ideal to make use of a handy map on HSRI’s website. The map marks out loop routes around the campus at three distances. All feature “waypoints” where participants can meet. Every route skirts the Leo and Dottie Kolligian Library, where walkers can grab refreshments at the Lantern Café.

Most important, the routes are liberating — they get bodies in motion and outside campus buildings, where face coverings are required. As for the meetings themselves, “When you’re moving around, your brain seems to work differently,” said HRSI Executive Director Trevor Hirst, the primary driver behind the map. “Your flow is better. You’re getting more oxygen into your lungs. I feel you have better ideas, conversations happen more freely, and you’re less constrained by the limitations of a conference table.”

“I don’t want to overinflate people’s expectations. You can’t logistically have a meeting with 10 people where you need to keep minutes. But for a few people who need to brainstorm or just discuss what’s been going on, it’s an ideal forum that gives you some sunshine and a bit of exercise.”

Hirst, along with research on walking meetings, notes their limitations. They can’t accommodate large groups well; gatherings of three or four are ideal. They are a poor backdrop for note-taking or presentations; they’re better for throwing around ideas or building consensus.

“I don’t want to overinflate people’s expectations,” Hirst said. “You can’t logistically have a meeting with 10 people where you need to keep minutes. But for a few people who need to brainstorm or just discuss what’s been going on, it’s an ideal forum that gives you some sunshine and a bit of exercise.”

The idea of organizing routes for meetings first came up about eight years ago, Hirst said. Back then, the routes incorporated still-existing paths and bridges from the old golf course upon which UC Merced was built. But safety requirements such as shade, water stations and emergency beacons sank that plan.

The completion of the Merced 2020 Project gave walking meetings new life. The expanded campus now offers loops that touch key locations where walks begin and end. Hirst and his wife, physics Professor Linda Hirst, along with Arturo Durazo — an HSRI project scientist — walked the routes to gauge distances and times. The results, as seen on the map :

Hirst, who sometimes walks the four miles from his home to the university (“People will stop and say, ‘Is everything OK? Do you need a ride?’ It’s kind of unfathomable to them.”) sees walking meetings as a healthy addition to a campus emerging from a health crisis.

“It’s a neat little overlay of that,” Hirst said. “It’s like, hey, as long as you guys are coming back, take a stroll, and bring along some colleagues.”