Skip to content Skip to navigation
See our Campus Ready site for the most up to date information about instruction.Campus ReadyCOVID Help
Health Sciences Research Institute
A Comprehensive Approach to Research and Innovation
Sunday 1 August 2021

By Victor A. Patton, Merced Sun-Star

MERCED -- When he's not examining cell cultures inside his Castle Airport laboratory, you might find Fabian Filipp surfing the waves somewhere along California's coastline.

If you happen to catch the lean 35-year-old native of Munich, Germany, holding court at Pacific Beach or some other picturesque surf locale, however, he won't be without sunscreen. 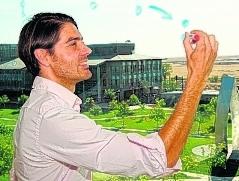 Case in point, Filipp is an assistant professor of systems biology and cancer metabolism at UC Merced, whose focus is studying the metabolic cycle of melanoma -- the most dangerous form of skin cancer.

Melanoma tumors originate in cells called melanocytes, which produce the skin's pigment. Mutations in melanocytes, often caused by exposure to ultraviolet radiation, can cause melanoma. "When these cells turn bad, they give rise to melanoma," Filipp explained. "When we're exposed to dangerous UV radiation, there's changes in the cell's genetic program, and the cell proliferates and divides in an uncontrolled fashion."