HIV/AIDS in Two Regimes: Exclusion and Inclusion of Black Americans in the Prevention Field and Disease Discourse

Department of Social and Behavioral Studies

Today within the United States, HIV/AIDS is understood to disproportionally affect black Americans; and, over the course of epidemic, black Americans slowly but surely have become central objects of U.S. public health prevention efforts. Additionally, black Americans are also now influential actors and advocates in the HIV/AIDS prevention field. These facts contrast with earlier moments of the epidemic when surveillance data, along with more general understandings and responses to the epidemic, centered on white gay males. In this talk, Moseby highlights important socio-political factors that contributed to the crossing of prevention practices and the disease discourse across the color line. Drawing on the concept disease regimes and utilizing a critical analysis of public health/biomedical publications, interviews with CDC officials and black American activists, and participant observation at HIV prevention conferences, Moseby argues that we can analytically distinguish two temporal configurations: the “regime of exclusion” (1981-1992) and the “regime of inclusion” (1993-present day). 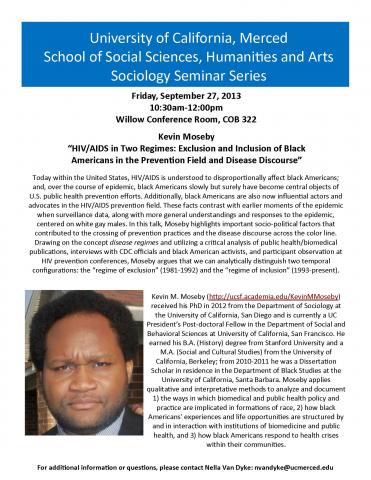